OLIVE YOU – EUROPEAN TABLE OLIVES from Greece demonstrated their uniqueness in ANUGA! 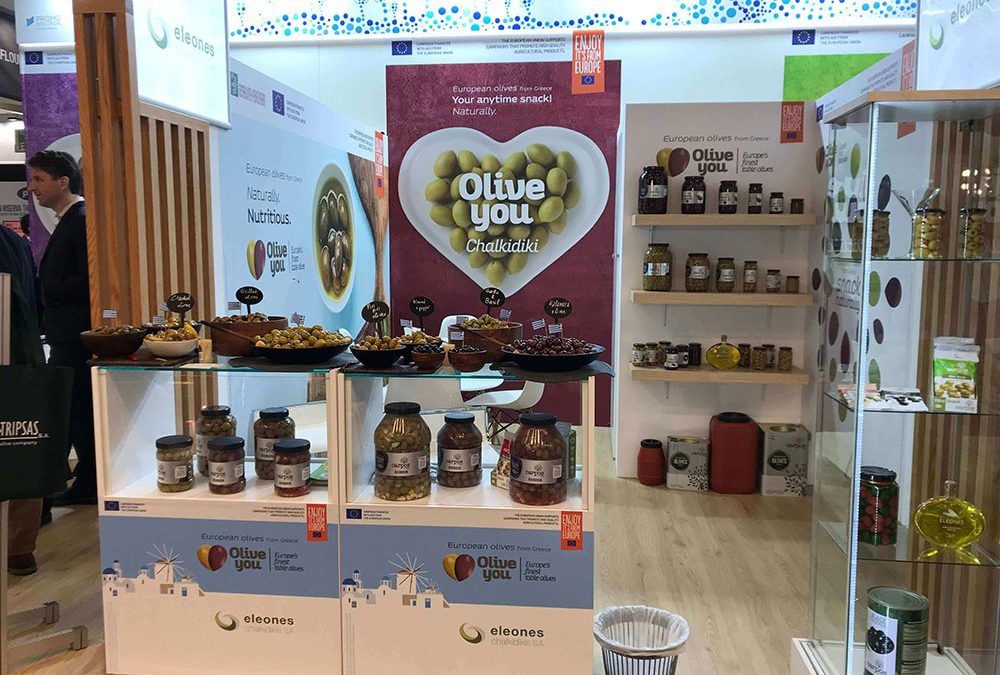 The Panhellenic Association of Table Olives Processors, Packers and Exporters (PEMETE) and the “OLIVE YOU European Table Olives” campaign attended ANUGA for the second time, to showcase European table olives from Greece in the highly targeted German market, and further develop valuable and effective relationships with professionals of the food business.

Under the umbrella of the “Olive You” campaign, the 7 companies-members of PEMETE participated in this significant trade fair with a series of modern pavilions, with an elegant and unified visual that brought up the contemporary profile of the European Table Olives from Greece. A significant number of importers and professionals from the HoReCa industry visited the Olive You pavilions, geRng to know the european table olive varieties from Greece, while geRng informed regarding the qualitative and tasting characteristics of the commercial types of the product. There was also a big number of visitors that filled in the campaigns questionnaire, resulting the collection of useful information about the knowledge and trends of the market in Germany and the rest of Europe regarding the table olive varieties as well as the packaging and the commercial types of the product.

The Olive You pavilions were honored with the presence of the Minister of Agriculture Mr. Mavroudis Voridis, the Deputy Minister of Macedonia-Thrace Ministry Mr Theodoros Karaoglou, the Consul General of Greece in Dusseldorf Mrs Maria Papakonstantinou, as well as the Consultants of Economic and Commercial Affairs of the Ministry of Foreign Affairs Mr Paris Nikolis and Mrs Frida Georgiou.

PEMETE (Panhellenic Association of Table Olive Processors, Packers and Exporters) is a professional association, founded in 1970, that promotes the interests of table olive exporters. The members of PEMETE are Greek exporting table olive processing, packaging and exporting companies. All of them process their end products in accordance with the existing Food Safety Regulation 852/2004.

The 52 member-companies of PEMETE represent more than 90% of Greece’s exports of table olives to more than 100 countries. These companies export some outstanding and unique Greek table olive varieties, such as: “Konservolia” a variety mostly farmed in Central Greece, “Chalkidiki” is mostly met in Northern Greece, “Kalamata” is – mainly but not exclusively – farmed in the regions of Etoloakarnania, Laconia and Phtiotida. Furthermore, small
quantities of “Throuba” and “Megaritiki” varieties are included in their product range. The greatest advantage of Greek table olives is that the olives “ripen” naturally on the olive trees.